The History of English Whisky

Many people would consider English whisky to still be very much in its infancy – and as relative “newcomers” to the English whisky scene, we would tend to agree. However, the future of the industry is very bright.

Although newly emerging, English whisky production dates back to the 1800s, with evidence of distilleries in Liverpool, Bristol and London. In 1887, British brewing and distilling historian Alfred Barnard published “Whisky Distilleries of the United Kingdom”. The book provides a unique insight into Victorian distilling practices, listing four distilleries that Barnard visited in England by the late 1800s. However, by 1905 the Lea Valley Distillery had closed its doors, marking the end of English whisky production for almost a century.

With the establishment of Hicks & Healey in 2003 and the English Whisky Company in 2006, over the past two decades there has been a resurgence of English distilleries across the country. Smaller, independent producers have directed their attention to craft spirits, taking an approach that centers value and innovation. In an age of increasing mass production and digitalisation, new distillers share a hand-crafted and smaller-scale approach, leading to a whisky revival that has been embraced by UK consumers and increasingly, across the globe.

Unlike gin and vodka, which can be distilled and bottled within the space of a few weeks, there is a legal requirement to age whisky for a minimum of three years. While whisky cannot provide an immediate cash flow, the higher value of the spirit is future oriented, especially with the potential for creativity in the revitalisation of English whisky to develop its own unique style.

The View on English Whisky

There has already been some high profile praise for what English whisky is doing in the industry, in terms of approach and quality. English distilleries are certainly not here to cut corners, they are here to put England right in the centre of the world of whisky, which for so many years has been dominated by Scotland, Ireland, the US, and more recently, Japan.

With consumer tastes and palettes evolving, there have been many developments in the global whisky scene. With recently raised tariffs on Irish whisky and Scotch, The Times published an article in October 2020 detailing how American consumers have started to develop a taste for English and Welsh whisky.

Reporting on the first festival dedicated to English whisky, Felipe Schrieberg from Forbes highlighted in this article the exciting future of English whisky:

“A new crop of whisky producers in England have taken their own unique approaches to production, and the results are often absolutely delicious”

Following the English gin renaissance, new figures from the HMRC show that the number of English distilleries have risen from 66 in 2014 to 228 by 2020. This is a tenfold increase from the 23 English distilleries in 2010. With the exciting developments of new whiskies entering the market, England has the potential to become a world-class whisky producer. 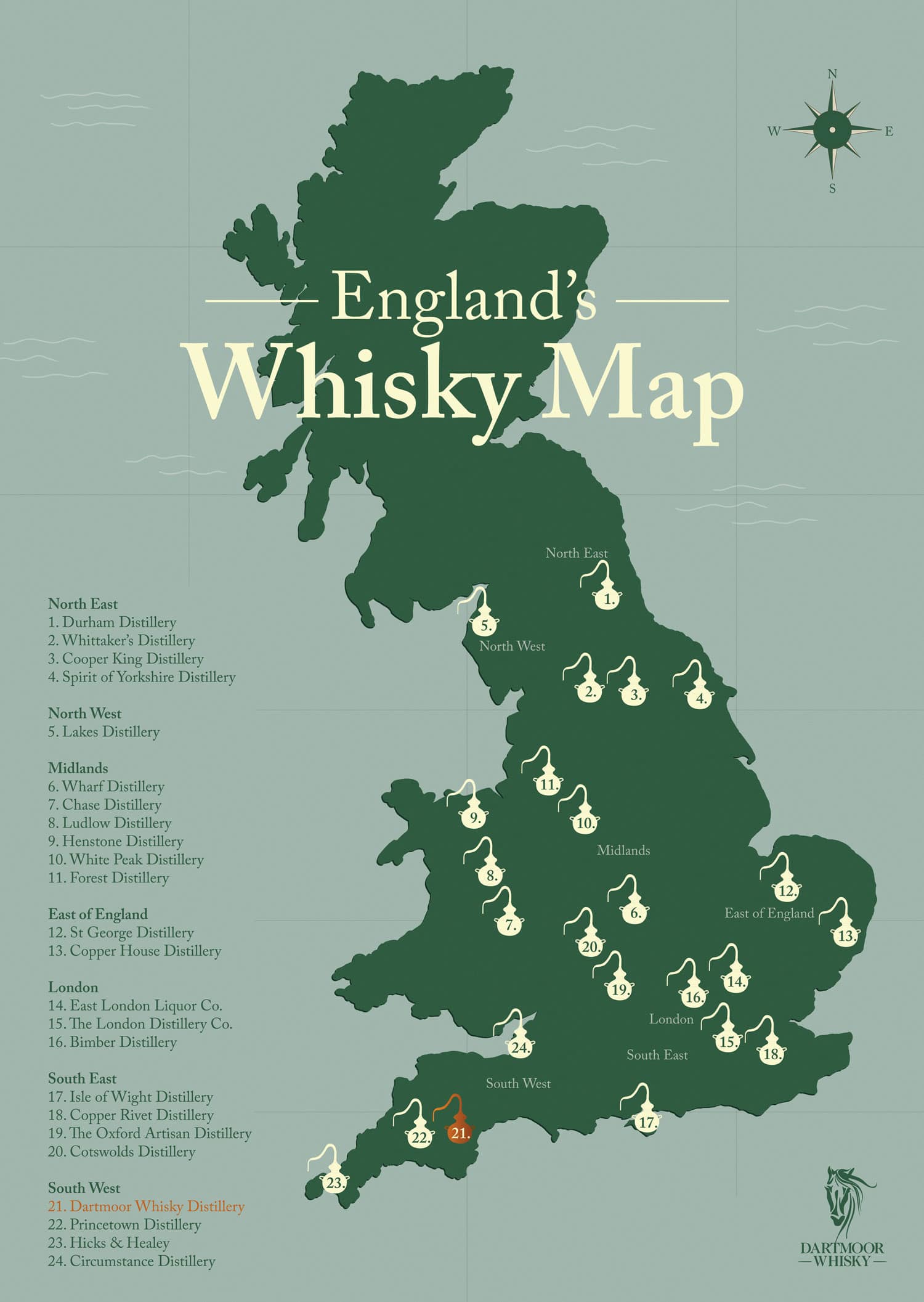 As the only whisky distillery in Devon, we use local barley and natural ingredients to craft our single malt whiskies, cut with pure spring water from Dartmoor National Park. Defined by both the region and our maturation process, the flavour profile of our whiskies are influenced by the granite geology and unique climate of our rural surroundings. As a result, our whisky has an unrivalled quality that captures the true spirit of Dartmoor.

Our Master Distiller Frank McHardy is recognised for his expertise and contribution to the whisky industry, including the revival of the Glengyle Distillery in Scotland. With 50 years of experience as a master distiller, working at both Springbank and Bushmills Distilleries, Frank guides each stage of our process to ensure Dartmoor Whisky Distillery produces beautiful single malt whisky every time.

Our three main whisky expressions are Ex-Bourbon, Bordeaux, and Sherry. After being distilled in our Alembic copper still, our whiskies are aged in these unique casks to influence the flavour of the final spirits.

Join today and get 10% off your first order.